A Brow Lift Offers Both Cosmetic and Health Benefits

Donât Look Older Than You Feel

Over time, the forehead develops lines and wrinkles in response to the expressions or muscle movement that takes place in this area of the face. As a result, both horizontal lines and frown lines can cause patients in Plano, McKinney, and the surrounding communities in Texas to look stressed, perpetually, angry or overly serious.

Fortunately, a brow lift can be performed to take years off your appearance and smooth out those unpleasant looking wrinkles or lines. You can expect a marked reduction of lines across your forehead and between your brows as well as elevation of your eyebrows to a more youthful position. Elevation of the eyebrows will also reduce the amount of excess upper eyelid skin you see. In some cases, depending on the individual, a brow lift may be performed in connection with eyelid surgery to fully rejuvenate the eyes and forehead.

Good Candidates for a Brow Lift

Generally those individuals who can benefit from a brow lift are experiencing the following facial issues:

Conventional and Endoscopic Rhytidectomy: An Introduction to the Brow Lift Procedure

A conventional open brow lift and endoscopic brow lift are the two primary kinds of brow lift surgery. The youth-enhancing procedure is performed in either a hospital or outpatient facility. Usually, the surgery can be performed using only a local anesthetic, which means youâll be sedated but will still be aware of what is going on around you.

In some cases, a general anesthesia is used which causes the patient to sleep during the operation. A brow lift takes from one to two hours on the outset, and patients can return home the day the surgery is performed.

Brow lifts are performed by either conventional means, using incisions, or by an endoscopic technique, which makes use of an incision that is smaller and a local anesthetic. The endoscopic brow lift generally results in less scarring and minimal swelling and bruising, which in turn reduces recovery time.

Preparation of the Brow Area

Preparation for a conventional brow lift includes clipping the hair and tying it away from the incision site. Incisions are generally made next to the ear and run up toward the hairline or beside the structural bone lines next to the scalp.

After incisions are made, the skin on the forehead is lifted, the muscles are repositioned, or additional tissue is removed. Any excess skin is trimmed away. Incisions are then clipped or sutured before the doctor applies gauze and a bandage around the head. Stitches or staples are removed about a week after the surgery.

An endoscopic brow lift requires that the surgeon make a small number of micro-incisions within the scalp. An endoscopic instrument is used to create a map of the eyebrows and forehead, all of which enables the doctor to lift the forehead skin and get rid of any excess of fat, skin, or muscles in the area of the brow. Afterwards, the area is clipped or sutured, and gauze and a bandage are applied. The staples or sutures and gauze are removed approximately a week after the procedure.

Possible Complications from a Brow Lift

As with any surgical procedure, there is the potential for complications. Generally, a brow lift is considered safe. However, itâs also important to know some of the possible adverse side effects. For example, some reactions might include:

Dr. Slack is a well-qualified plastic surgeon and is knowledgeable in brow lift procedures. So the above side effects are not reactions that should be a cause for concern. As long as you adhere to the surgeonâs pre-operative and postoperative recommendations, you should experience few, if any, difficulties in this respect.

Preoperative directions may include the following:

Regular or Anticipated Side Effects of a Brow Lift

After the surgery, expect to experience such side effects as the following:

Depending on the type of brow lift performed, the above reactions can last from three to four weeks.

Postoperative Care after a Brow Lift

Postoperative instructions encourage a faster recovery and include the following:

Patients generally return to their regular routines or daily activities after about ten days.

A Cure for Migraines

While the main purpose for a brow lift is to cosmetically enhance and improve oneâs facial appearance, the cosmetic procedure has also been proven to aid in curing migraine sufferers of headache pain. According to one recent study in the January 2011 edition of Plastic and Reconstructive SurgeryÂŪ (PRSÂŪ), respondents who suffered from excruciating headaches who underwent a brow lift often experienced a marked reduction, if not complete cure, from the attacks.

Thatâs because a brow lift frequently involves the removal of certain nerves and muscle tissues that trigger the headache pain. So not only will a brow lift make you look younger, it can also make you feel physically better too.

In addition, brow lifts for men can solve health issues, such as impaired vision. Because male eyebrows generally begin at a lower position than female brows, a brow lift, performed either alone or with eyelid surgery, not only aids in improving oneâs eyesight but restores a more youthful appearance as well.

Contact Dr. Slack about a Brow Lift in Plano and McKinney, Texas

If you have questions about brow lift procedures or youâre sure that youâd benefit from this procedure, schedule a private consultation with Dr. Slack to discuss your goals and concerns. He looks forward to speaking with you. 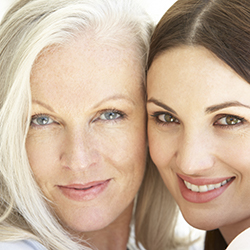